The “Mongo’s Garage” signs started out as a joke on my truck.
(Mongo’s had been my nickname for years around my buddies.)
After having the sign’s on my truck for a couple weeks I pulled them off one day washed the truck then headed over to a cruise night where I was constantly bombarded with questions about them so back on they went.

I’m from Brookfield, Missouri and the CL8 750 was my grandparents phone number back in the day when Clearwater Eight Seven Five Oh told the operator who to get on the line.
After a couple years of having them on the truck and people coming up and asking me about the garage and wanting “Mongo’s Garage” to sell them parts or do some work on their trucks.
A good buddie convinced me that “Mongo’s Garage” should be the real thing. There have been many rare parts that I’ve searched for over the years that I’ve thought “Somebody should be making those”
As well as many new and different idea’s I’ve seen or thought of that I thought the AD truck community could benefit from.
That’s our goal at Mongo’s garage to become The Resource for folks working on
47-54 trucks, suburban’s, panels and big trucks too!
If there’s a product or idea you’d like to see produced for these vehicles feel free to hit us up we are more than happy to discuss possible future products. 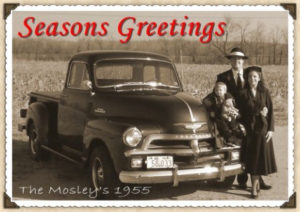 Ever since I was a kid, I’ve had an interest in trucks, all trucks!
Then in high school when my sweetheart’s dad showed up to pick us up from a date in his Chevy 1954 1/2 Ton I realized a guy could fall in love at first sight twice in his life, first with her (now my wife) and then with her dad’s truck!

Several AD trucks slipped through my hands before we got married and when we did get married we were out of the country and when we returned I discovered that the dowry I had my eye on (a yellow 47-53 truck) had been sold by my father in law. I think he really did me a favor, (I think it had only one good headlight ring). I gave up on the dream for a few years then one day on the way home from work I spotted a 53 on the side of the road for sale, I was late getting somewhere at the time so I didn’t stop to look and the next day I made time to go back by but the truck was gone, I thought I had missed out again. Then a week later on the way home again I spotted it and stopped. Long story short after a couple days it was mine!
And the rest is history.
As of this writing I’ve collected ton’s of trucks(two ton’s too), and have big plans for several of them.
My wife and I have also collected a little wrench fetcher of our very own Alexander Dean (AD) Mosley and he’s already into anything with wheels and helping daddy with the trucks.